Feeds for this blog

I’ve recently acquired a new laptop with an Intel i7 Quad Core CPU – an i7-940XM to be precise, and I’m interested in the possibility of running parallel MCMC codes on this machine (a Dell Precision M4500) in order to speed things up a bit. I’m running the AMD64 version of Ubuntu Linux 10.10 on it, as it has 8GB of (1333MHz DDR2 dual channel) RAM. It also contains an NVIDIA 1GB Quadro FX graphics card, which I could probably also use for GPU-style speed-up using CUDA, but I don’t really want that kind of hassle if I can avoid it. In a previous post I gave an Introduction to parallel MCMC, which explains how to set up an MPI-based parallel computing environment with Ubuntu. In this post I’m just going to look at a very simple embarrassingly parallel Monte Carlo code, based on the code monte-carlo.c from the previous post. The slightly modified version of the code is given below.

This code does 10^9 iterations of a Monte Carlo integral, dividing them equally among the available processes. This code can be compiled with something like:

and run with (say) 4 processes with a command like:

How many processes should one run on this machine? This is an interesting question. There is only one CPU in this laptop, but as the name suggests, it has 4 cores. Furthermore, each of those cores is hyper-threaded, so the linux kernel presents it to the user as 8 processors (4 cores, 8 siblings), as a quick cat /proc/cpuinfo will confirm. Does this really mean that it is the equivalent of 8 independent CPUs? The short answer is “no”, but running 8 processes of an MPI (or OpenMP) job could still be optimal. I investigated this issue empirically by varying the number of processes for the MPI job from 1 to 10, doing 3 repeats for each to get some kind of idea of variability (I’ve been working in a lab recently, so I know that all good biologists always do 3 repeats of everything!). The conditions were by no means optimal, but probably quite typical – I was running the Ubuntu window manager, several terminal windows, had Firefox open with several tabs in another workspace, and Xemacs open with several buffers, etc. The raw timings (in seconds) are given below.

A quick scan of the numbers in the table makes sense – the time taken decreases steadily as the number of processes increases up to 8 processes, and then increases again as the number goes above 8. This is exactly the kind of qualitative pattern one would hope to see, but the quantitative pattern is a bit more interesting. First let’s look at a plot of the timings. 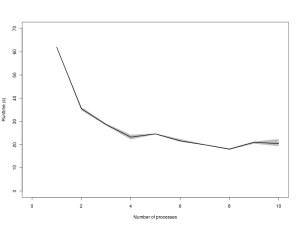 You will probably need to click on the image to be able to read the axes. The black line gives the average time, and the grey envelope covers all 3 timings. Again, this is broadly what I would have expected – time decreasing steadily to 4 processes, then diminishing returns from 4 to 8 processes, and a penalty for attempting to run more than 8 processes in parallel. Now lets look at the speed up (speed relative to the average time of the 1 processor version). 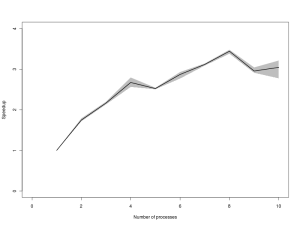 Here again, the qualitative pattern is as expected. However, inspection of the numbers on the y-axis is a little disappointing. Remeber that this not some cleverly parallelised MCMC chain with lots of inter-process communication – this is an embarrassingly parallel Monte Carlo job – one would expect to see close to 8x speedup on 8 independent CPUs. Here we see that for 4 processes, we get a little over 2.5x speedup, and if we crank things all the way up to 8 processes, we get nearly 3.5x speedup. This isn’t mind-blowing, but it is a lot better than nothing, and this is a fairly powerful processor, so even the 1 processor code is pretty quick…

So, in answer to the question of how many processes to run, the answer seems to be that if the code is very parallel, running 8 processes will probably be quickest, but running 4 processes probably won’t be much slower, and will leave some spare capacity for web browsing, editing, etc, while waiting for the MPI job to run. As ever, YMMV…

I am Professor of Statistics within the Department of Mathematical Sciences at Durham University, UK. I am an Bayesian statistician interested in computation and applications, especially to engineering and the life sciences. View all posts by darrenjw

This site uses Akismet to reduce spam. Learn how your comment data is processed.

an attempt at bloggin, nothing more...

Thoughts on Statistics and Machine Learning